👋🏻 Hi! Wondering how to get started with Amish Friendship Bread?
Check out my Quick Start post and reach out with any questions!
Share7
Pin
Tweet
7 Shares

Who says Amish Friendship Bread can’t hang with the best of them? This month, we’re in Saveur, a gourmet, food, wine, and travel magazine that focuses on great food and enduring culinary traditions. Special thanks to Saveur writer, Brooke Porter Katz, for her article, The Cake You Bake Every 10 Days: Making Amish Friendship Bread Isn’t Just a Recipe—It’s a Way of Life which gives a shout-out to our awesome community at the Friendship Bread Kitchen:

Darien Gee, a writer who lives in Hawaii, was the most passionate Amish friendship bread fan I came across. She was so taken with it that it inspired her to write the novel aptly named Friendship Bread. Gee has built a community of bakers on Friendship Bread Kitchen, which has become a library for recipes that can be made with the starter, including biscotti and oatmeal-cranberry cookies. Gee believes that the tradition evokes the spirit of the Amish, sharing what you have with others. 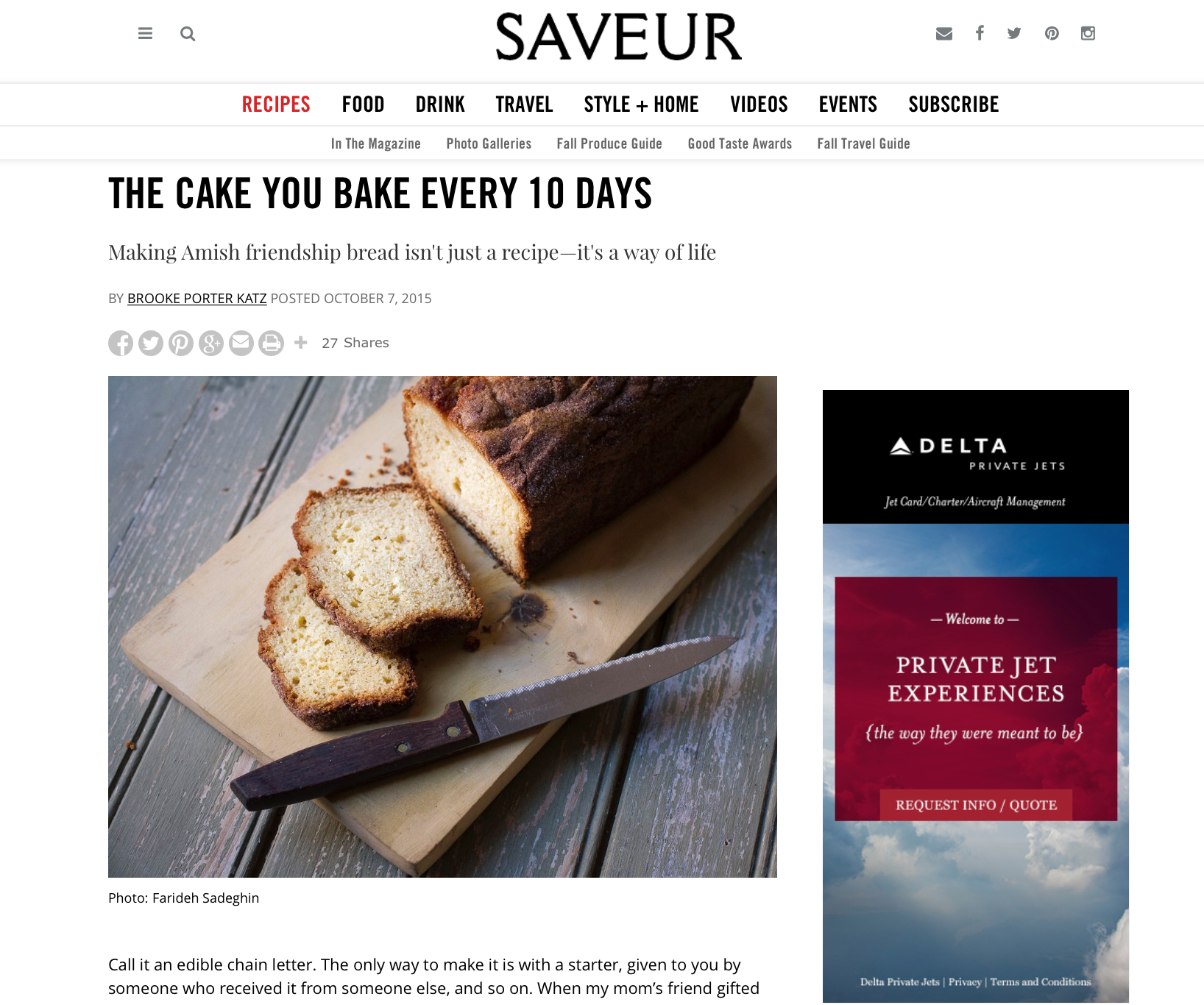 The article touches on the big question: is Amish Friendship Bread really Amish?

My take, after having done some research when the Kitchen first started, is that it’s inspired by the Amish in that (1) it doesn’t need to be refrigerated and can be used at anytime to make bread, cakes and rolls and (2) it’s all about sharing what you have with others.

The truth is that we can make a lot of these recipes without using the starter at all, but then where’s the love? Starters are all about growth and getting better over time, and everyone putting in a little bit of their hearts and kitchens into the starter and passing it on.

Amish Friendship Bread, at least in the form that first came to me, included instant pudding mix which doesn’t strike me as particularly Amish. It also exists in Europe as Hermann or Herman bread. There are fruit versions of this bread (where you ferment fruit for 30 days to get the starter going). I received an email from the leader of a Girl Scout troop in New York who is attributed as the first documented use of Amish Friendship Bread in America, but I’ve met plenty of people who were doing it before then as well.

For me, it doesn’t really matter. Amish Friendship Bread comes in cycles and waves, each time spreading happiness while leaving bits of sugar and cinnamon in its wakes. It’s fun, it’s delicious, and it brings people together. And that’s what the Friendship Bread Kitchen is all about, too.

FAQ: Wondering if it’s safe to share the bread or the starter? The experts say yes. Read more here.