Many spices marry well with chocolate: cinnamon and vanilla, but cayenne pepper is one of our favorites, especially in this Mexican Hot Chocolate Amish Friendship Bread!

Serve this with a dollop of whipped cream just as you would a warm, spicy cup of Mexican hot chocolate!

Kitchen Friend Pia decided to mellow the sweetness in this recipe: “It turned out wonderful. I used just half the sugar in the ingredients. They all loved it!”

Kitchen Friend Paula Altenbach experimented with baking this recipe at high altitude: “This recipe is a ”MUST MAKE AGAIN!” The cinnamon doesn’t hit you in the face or fade in the background. It stands side by side with the chocolate chips. I became excited the second the batter colored to cinnamon spice. Then the aroma in the kitchen seconded that thought! To compensate for my altitude at 6,035′, I added ⅓ extra flour and dropped each baking powder and baking soda back by ¼ teaspoon. I had a minor dip in the rise. With further consideration, I will not cut back on both leavening ingredients, only a bit less soda.” 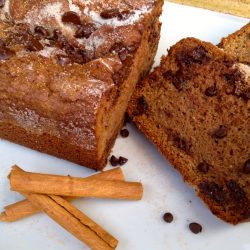