This recipe was adapted from Florence Fabricant’s Rye and Ginger Cake in New York Times Cooking.

Here’s a video to show you how I made this recipe:

Adding the eggs one by one is important in this recipe. You’ve already creamed the butter, sugar and Amish Friendship Bread starter so that high fat content doesn’t want to naturally mix with the eggs. Adding them one by one gives the batter a chance to fully incorporate the eggs and emulsify, resulting in a smoother texture in the finished bread.

Once you get your bread out of the oven, you’ll want to remove it from the pan and place it on a rack on top of a baking sheet before drizzling with the whiskey glaze. Poking the surface with a medium skewer allows the glaze to penetrate the bread even further. You’ll want to do this while the glaze is warm, because once it starts to cool, it won’t travel as far.

Your kitchen (actually, your whole house) will smell malty and amazing. It’s a perfect after-dinner digestif, and goes well with a finger of whiskey, a cup of strong coffee, or a tall, cold glass of milk. If saving for the next day or two, wait to slice and wrap well in foil once cool. 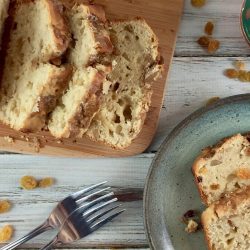