👋🏼 Hi! Ready to make some Amish Friendship Bread? Check out our Quick Start post!
This post may contain affiliate links. Please read my terms of use and disclosure policy.
2.9K shares
Jump to Recipe

Kitchen Friend Tamara Jessee added this fun tip: “Try a Death By Chocolate variation and use 2 boxes instant chocolate fudge pudding, ¼ cup Hershey Chocolate syrup instead of the cocoa powder. Coat the chocolate chips in flour to prevent them from sinking to the bottom of the pan. This is a very rich bread, like a dessert!”

Kitchen Friend Ginny Lantz gave the recipe a fudge flavor: “Try the Chocolate Fudge variation by replacing the 1 cup of oil for 1 cup of butter and increase the cocoa to ½ cup. A mixture of black cocoa and alkalized cocoa adds richness.”

“I used half whole wheat flour and half white flour,” says Kitchen Friend Lucia Cockfield. “I used soymilk instead of dairy milk, cut the oil down by half and added ½ cup of unsweetened applesauce. For the sugar I used ½ cup regular sugar, and ½ cup of dark brown sugar, and only used 1 small box of pudding. I added the ganache drizzle from the Recipe Box.” 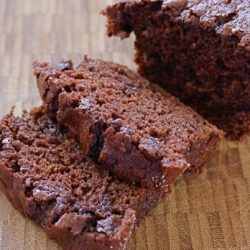