This recipe almost didn’t happen, because I’m not a persimmon fan. Maybe it’s because I grew up in communities where persimmon trees were everywhere (as in EVERYWHERE), and people were eating them all the time and trying to pass off their extra fruit to their neighbors. I don’t know what it is, but there’s something about the persimmon that throws me off. It looks like a tomato but with less promise, so I never gave it much thought, until now.

I adapted the recipe from Stephanie at Girl vs Dough. She has lots of wonderful recipes, but when I saw this one I got all worked up (seriously. It was weird.). At any given time I have a list of at least 15 Amish Friendship Bread recipes I need to work on, but I pushed ALL of them aside so I could figure out how to make this one work. I also drove 20 miles to get the persimmons because my local grocery store didn’t have any left. The irony was not lost on me.

I like incorporating fruit into the batter whenever possible. It adds flavor, moisture and texture to the bread, and in some cases (like this one), I can leave out the dry pudding mix altogether. This does mean you’ll have to spend a little extra time prepping the fruit, namely chopping and de-stemming the persimmons, then pulsing it into a puree before you can fold it in to the batter.

I knew I wanted cupcakes, but since my silicone baking cups tend to run a little small I had just enough batter left over to make a mini loaf.

I frosted the cupcakes with a vanilla-ginger buttercream frosting, then sprinkled on some cinnamon and topped it with a wedge of candied ginger. I dusted the mini loaf with powdered sugar.
We inhaled these cupcakes. My carb-free husband had a slice of the loaf with a cup of coffee. My kids did that thing with your fingers when you press down on every crumb so as not to miss any of it. I would have shared these with my neighbors but they were gone in a day. I’m definitely going to try this one again soon, and I’ll most likely make it into a cake or layer cake. Visit the Conversion Tables page to see how to tweak a recipe if you decide to use different bakeware. 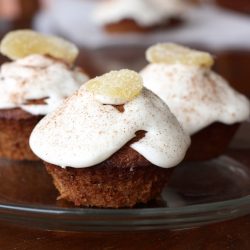