Five ingredients and five minutes are all you need to create these scrumptious sourdough discard crumpets! If you are currently feeding and maintaining a jar of sourdough starter, you’ll most likely always have some discard on hand, which means you can make these anytime!

Once you’ve got a jar of sourdough starter going, and if you are regularly feeding it, you will end up with a jar of sourdough discard stored in your fridge (it’s either that or throw it away — don’t do that, LOL!). Discard is starter that hasn’t been fed too recently and may not be as active as you’d want it for your perfect sourdough loaf, which relies on the rising power of the starter to leaven your bread. But sourdough discard still has enough lift and energy to work in recipes that aren’t as airy, like these crumpets and most of the recipes in our Recipe Box that call for one cup of Amish Friendship Bread starter.

The main difference between crumpets and English muffins is the dough. Crumpets are more of a loose batter, which is why the ring molds are quite necessary for the bread to hold its shape. English muffins, on the other hand, are made from a firmer dough, which is why they can be dropped onto the griddle. Traditionally, crumpets are also only cooked on one side, not flipped, so that you get the classic bubbles showing through. They are also buttered and have jam on top, compared to English muffins which are split open to reveal the craggy interior.

How to Make Sourdough Discard Crumpets

Here’s a quick peek at how easy it is to use your discard for crumpets. First, heat a skillet or griddle on medium heat with some extra virgin olive oil. In a medium-sized mixing bowl, combine your discard, flour, water, baking powder, and salt.

Place crumpet rings on the skillet and add batter. You can try to use 3″ mason jar rings, too — just make sure they are well greased with oil or butter and placed top-side down.

Cook until bubbles appear (just like when making pancakes) about 4-6 minutes.

Carefully remove the rings and flip (if the rings are too hot to handle, you can leave them on and remove at the end). When they’re a beautiful golden brown, transfer to a wire rack to cool.

It’s easy to dress up your crumpets, too. Add a handful of raisins or stir in a dash of cinnamon. Craisins are another great option and would pair nicely with some orange zest. Think blueberries, or maybe even some pumpkin spice! If you’d like a sweeter crumpet, try using a little honey or make English muffins from Amish Friendship Bread Starter, as that starter is already sweeter. Enjoy! 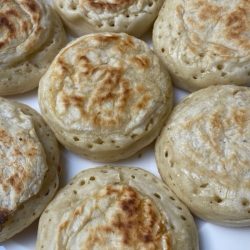 Add a handful of raisins (about ¼ cup) or stir in a dash of cinnamon. Craisins are another great option, and would pair nicely with some orange zest. Think blueberries, or maybe even some pumpkin spice! If you’d like a sweeter crumpet, try using a little honey
Have you made this?Mention @friendshipbreadkitchen or tag #friendshipbreadkitchen!