👋🏼 Hi! Ready to make some Amish Friendship Bread? Check out our Quick Start post!
This post may contain affiliate links. Please read my terms of use and disclosure policy.
4.8K shares
Jump to Recipe

Most people are surprised to discover that one cup of Amish Friendship Bread starter can make a lot more than a couple of loaves of sugar-cinnamon bread. As you’ve probably discovered in my Recipe Box, there are LOTS of things you can make, and this crusty chewy artisan Amish Friendship Bread loaf is one of them.

Fresh homemade bread is so much easier to make than people think, and it’s better for you, too, because there aren’t any preservatives and it hasn’t been sitting around for a couple of days or even weeks, waiting for someone to buy it.

Kitchen Friend Heidi Kleyn came up with this wonderful recipe for an artisan loaf (it yields two loaves, actually) that will remind you of your favorite crusty sourdough bread, with that subtle Amish Friendship Bread sweet-sour tang. It’s perfect served alongside this mushroom sausage pasta, too. A special thanks to Kitchen Friend Cathy Wagner List for sharing photos of her bread as well.

This recipe uses commercial yeast in addition to the leavening power of your starter. We’re not the only ones — Cook’s Illustrated also adds yeast to sourdough recipes to give their breads a little boost. This is especially helpful if you want to bake bread in the winter or if your kitchen is cool, as traditional starters go dormant in cooler temperatures. 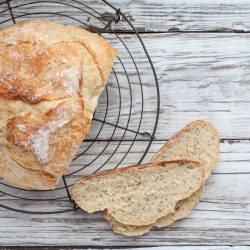 From Heidi Kleyn: “Use the starter on Day 10 before adding the flour, milk and sugar. Experiment with different flours for this bread. Try using 4 cups of flour and 1 cup of whole wheat flour.” From Cathy Wagner List: “This bread is the best I’ve ever had! I used a stand mixer and followed the directions exactly. I’ve made it twice and the bread came out better the second time when I only mixed with dough hook for 2:30 minutes. It’s important to pay attention to dough clinging perfectly and clean sides of the bowl. The first time I used the whole 5 minutes with mixer and bread was a little tough. Second time I just judged by the mixer and dough with clean sides of bowl and it was only 2:30. I put pan in bottom of oven while preheating and when I put bread in, I threw in a cup of cold water in the pan to steam. It worked great. This bread is epic.”
Have you made this?Mention @friendshipbreadkitchen or tag #friendshipbreadkitchen!

>> Have you tried this recipe? Give the recipe some stars and leave a comment below and let us know how it worked for you!