This has been on my list to make FOREVER, and I’m excited to share it with you today! If you’re baking Amish Friendship Bread regularly, this bread pudding recipe is super simple and easy to make.

I used the original cinnamon-sugar loaf, but you can turn almost any Amish Friendship Bread recipe into a delicious bread pudding. It looks and smells amazing when it comes out of the oven, and makes a great dessert centerpiece or weekend brunch treat. Bake it in a casserole dish or individual ramekins–it’s really up to you!

What exactly IS bread pudding?

Bread pudding has a long history. It was once known as a “poor-man’s pudding.” It’s since become a trendy dessert staple on many gourmet menus, especially in New Orleans. It’s usually made with bread which has gone stale and hard, which means nothing gets wasted.

Traditionally, bread pudding is made by soaking chunks of bread in a mixture of egg and milk. Then it’s put into the oven where it becomes a baked custard. You can use any kind of bread, savory or sweet. It also works well with any frozen Amish Friendship Bread you may have forgotten about in the freezer and need to find a delicious way to repurpose.

I cut my slices into bite-sized cubes, about 1-2″ each. Amish Friendship Bread usually stays moist for days and acts more similar to cake or a quick bread rather than a traditional loaf of bread. Because of this, I’ll sometimes give my leftover Amish Friendship Bread a little extra help. If it’s still moist, spread the cubes on a baking sheet. Toast at 350° F (or 180° C) until crispy on the outside, about 10 minutes. If I know I’ll be making a bread pudding in the future, I’ll store a bag of cubes in the freezer so it’ll be ready when I’m ready.

If you prefer to make your bread pudding in small ramekins, bake for 40-45 minutes instead of an hour until a lovely golden brown. A knife inserted into the middle should come out sticky with no runny egg mixture.

Any of these Amish Friendship Bread recipes will make a terrific, flavorful bread pudding and any pre-existing add-ins (like raisins, currants, or chocolate chips) make the end result even more delicious:

For adult company, serve with a vanilla hard sauce. For little kids, a scoop of vanilla bean ice cream is perfect. Enjoy! 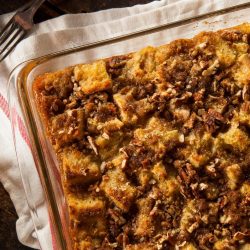 Whiskey Sauce (for the grown-ups)

Vanilla Sauce (for the kiddos)

To make the whiskey sauce

To make the vanilla sauce